How many implementations of Canny edge detection do we have in Haskell? How fast are they and which array libraries are responsible for their performance? These are the questions I'll try to answer in this blog post.

I am currently working on getting Haskell Image Proceesing library, aka HIP, to be faster, better, friendlier and more correct than it is today. The biggest change is the rewrite with massiv library instead of current implementation that uses repa and vector. One of the algorithms I'd like to add in the process of working on this transition is Canny edge detection. Which also seems like a great algorithm to use for comparing performance of libraries that can do array processing in Haskell, so that's what I did and that is exactly what this blog post is about.

In pure Haskell I only found two implementations of Canny edge detection algorithm. If there is one that I missed, please let me know. One was written by Ben Lippmeier for the repa project and another one by Raphael Javaux for his image processing library friday. That would be sad if that was all to it, but there are at least three other implementations that I know of, which all seem to be modified versions of Ben's implementation that work for other libraries, including mine. This is really great, because we have very similar looking implementations of the same algorithm that use totally different libraries and produce nearly identical results. This allows me to write reliable and objective benchmarks, because I personally didn't take part in neither of those implementations, except the variant for massiv, of course, since that is the library I authored.

I only care about the code that runs on CPU, therefore GPU is completely outside of the scope of this post. Below is the list of implementations that I found:

There are two other Canny edge detection implementations in other languages that are available in Haskell by the means of FFI: opencv and arrayfire. I'd really like to have benchmark comparison for them as well, but for now my focus was on pure Haskell.

Few personal notes on the libraries in question:

The whole juice of this post is located in the haskell-benchmarks/canny repository so the code can be studied and results can be reproduced by any interested party. There are some instructions in the README on how to run the benchmarks, reproduce the results as well as some performance numbers generated by my old laptop.

In order to have objective numbers for the libraries we do need to concentrate on the algorithm itself, therefore reading and writing of images have been abstracted away with massiv-io, Color and JuicyPixels, none of which participate in the benchmarks.

Without further ado here are some bar charts. 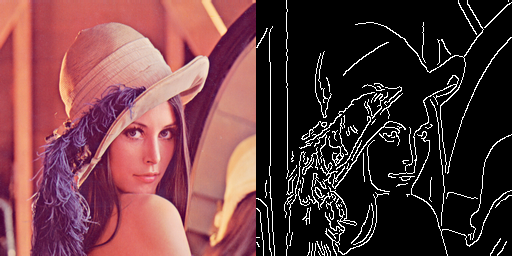 And this one is the same code applied to a slightly bigger 1920x1236 image of a cute little frog:

friday has no means of parallelizing the computation, so it is not surprizing that it performs like TGIF. Even if it did use all the available cores it wouldn't get anywhere close to being competitive, just because it is lagging too far behind.

yarr claims being faster than repa, but it does not live up to its promise. Moreover, considering that this package relies heavily on fixed-vector, which has experienced a drastic change to its interface in the last two years, it would take good amount of work in order to make yarr compatible with the newest version. It looks like yet another array library has a pretty sad future ahead of it.

repa does lives up to its expectations of being fairly fast, but it is no longer the fastest kid on the block. The biggest drawback of this library is lack of features. For example, its stencil implementation is only capable of convolution, which prevents combining computation of gradient, its magnitude and orientation in one iteration. Neither massiv nor accelerate are susceptible to this problem.

accelerate does not do too well on small images, but that is the expected behavior and in fact it is warned about by the authors. Reason for this is that the library does some just-in-time compilation of the Haskell DSL into the target architecture, which on its own takes time. This means that the computation you are trying to perform ought to be somewhat heavy in order for the benefit to reveal itself. As far as I know this affect is even further amplified for GPUs, because data has to be transferred over to/from GPU memory before it can be operated on, but don't quote me on that. There are a few other limitations that the library imposes on you, but that is not the point of this post, so I am not going to expand on any of that.

massiv outperforms them all, at least in these benchmarks. I am usually not the kind of person to be bragging about the stuff that I've done, but the results I've seen here speak for themselves and I believe that massiv does deserve to be bragged about at least a little. Its major strong points are:

For larger images massiv, repa and accelerate are not too far from each other with respect to performance, so I think it is worth to take a look at runtimes of individual steps of the algorithm. This would allow me personally as a maintainer of massiv to see where I can focus my attention in order to improve the library in the future.

Now let's look at a high level overview of individual steps of the algorithm and their performance analysis.

Edge detection can't happen directly on the color image, so the first natural step is to convert an sRGB encoded image into grayscale as luma (i.e. non-linear brightness of an image). All of the libraries mistakenly call it luminance, but that is besides the point. What matters is that the conversion happens in the exact same manner: y = r * 0.299 + g * 0.587 + b * 0.114. There are also arguments against using luma for some of the steps in Canny, especually blur, but here I want to compare performance not accuracy, so I went for consistency instead of correctness.

To my surprise, accelerate performed quite well at this rather simple step, much better than the other two libraries. The only possible explanation I can have is that reliance on LLVM allows it to automatically exploit SIMD instructions, which unfortunately isn't the luxury that we have when compiling with GHC. Writing those instructions manually with GHC primitives and LLVM backend is close to a nightmare and rarely yields any benefit. Nevertheless it gives me ideas where I can spend more of my time in order to improve performance even further.

At this step we remove unwanted noise by performing a gaussian blur, which involves convolving the image twice. Once in horizontal and once more in vertical directions. This separation into two convolutions is a very useful optimization and it is only possible because gaussian kernel is separable. Both repa and massiv have nearly identical performance, while accelerate is lagging behind for smaller images and would likely catch up with larger size images.

Besides computing the gradient with Sobel filter in this step we also need to compute its magnitude and orientation. As mentioned earlier repa can't do it in a single step and has to do three passes over an image, which has a negative impact on the runtime. accelerate does combine all the substeps into a single stencil application, nevertheless it doesn't help it enough to finish earlier than massiv.

Runtime of non-maximum suppression pass does not seem to differ much between the libraries. Similar to blur, all three seem to converge to equal runtime with larger sized images.

Finding strong edges is essentially a filtering operation. Both repa and accelerate try to run this step in parallel, which seems to only affect the performance in the negative way. I found that it is better to rely on streams and do such operations sequentially, similar to the way vector library does it. For this reason massiv is quite a bit faster then the other guys.

Last step of Canny edge detection involves edge tracking by hysteresis, which sort of looks like a wildfire, hence is the name I assume. This is an inherently imperative part of the algorithm and relies heavily on mutation, which repa has no interface for and falls back onto vector for the implementation. accelerate has no means of mutating arrays either therefore it falls back on repa for the last stage, which again relies on vector package. For that reason or another both of them are lagging behind massiv quite a bit, which was design from the ground up to be a mutation friendly library.

The only thing I can conclude here is that massiv is doing pretty good. As the author of the library I mostly spent time on designing the interface and working on performance optimizations. It is only recently with my work on hip that I finally got a chance to put myself in the user's shoes at a scale larger than a few lines of code and so far I can say it's been a pleasure. Both usability and performance make me think that the time I spent on it was worth my while.

I'd like to take this opportunity and say thank you to everyone behind the work on vector, repa and accelerate. All the resources produced over the years has taught me a lot and served as inspiration for many design choices I made in massiv.